The new brewery's president wasn't entirely successful in his negotiations with Rainier. While he had secured use of the Fredericksburg brand with the purchase of the brewery, he failed to regain rights to the Tacoma brand.

Prior Prohibition there were just three breweries in San Jose, the Fredericksburg Brewery, the Eagle Brewery, and the Geoffroy Brothers' Garden City Brewery. The city voted to become "dry" in 1918 and all three Breweries ceased operations. During the years of Prohibition (1920-1933) many breweries continued operating by producing near-beer or soft drinks, but the San Jose plants remained shuttered until Repeal in 1933.

Pacific Brewing & Malting's Fredericks Brewery was ready with product the day legal beer was permitted. Fredericksburg Beer hadn't been forgoten and it was imediately in high demand. They also released Old Heidelbrau at the same time, and it too, did well initially. While offically the Pacific Brewing & Malting Co. they were also doing business as the Fredericksburg Brewing Co. - at least until about 1941.

In order to maximize plant capacity many breweries leased portions of their plants or contracted to brew and bottle for for other companies. Pacific Brewing & Malting (PB&M) chose the later, and produced Franco's Quality Lager for a local market chain. Later they also produced the budget supermarket beer, Brown Derby.

In November of 1934 PB&M introduced the Cortez brand of beer, perhaps to attract more Latino customers. It was first available as Cortez Draft in half-gallon bottles. They later shifted to Cortez Beer in a 22 oz. bottle, discontinuing Draft in a jug.

Initially, Pacific Brewing & Malting's local competion consisted of only the Garden City Brewery, since the Eagle Brewery had been dismantleed for its bricks in the mid-1920s. However, the Geoffroy Brothers (George & August) were having trouble finding enough financing to re-start their plant. So they reorganized Garden City Brewing as a distributing company and contracted for the brewing and bottling of their brands.

The Geoffroy Brothers chose two brands for the rollout upon Repeal, one of which had a long history in San Jose. Old Joe's Steam beer was a brand of the now defunct Eagle Brewery. It was named after the brewery's founder, Joseph Hartmann, who established the brewery about 1852. Old Joe's Steam beer was still being sold up until 1918, and was well remembered. The Geoffroy Bros. put the 1852 date on the label to tout the brands iconic status in San Jose.

The other brand they chose was Ritz Beer, which seems to have originated with the Brothers. Both of these beers were brewed & bottled in the Fredericksburg Brewery. Garden City also distributed Old Joe's Lager beer, and Ritz Steam beer.

After a few years of contract brewing the Geoffroy Brothers merged their business with PB&M, becoming major stockholders in the Fredericksburg Brewery. Both of the brothers would serve on the company's Board of Directors, and August Geoffroy would serve as the brewery's vice-president. With the merger, the Garden City brands were transfered to PB&M. The Old Joe and Ritz brands were then marketed with PB&M labels.

In the late '30s PB&M added an ale to their line-up. Their first offering was Boilermaker Ale and Pale Ale, a brand that was marketed to the working class, like factory workers, union men, and "manely" men in general. They later modified one of their existing brands to attract a different demographic, specifically women. Ritz Beer was offered in an 8 oz. bottle with a label that reflected elegance and refinement.

The Ritz Beer label, ca.1939, is noteworthy in that it states "brewed by Wielands." This would suggest a new direction for the brewery. 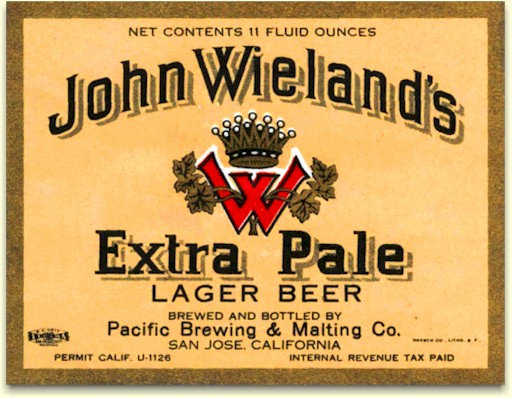 In July of 1936 Pacific Brewing & Malting purchased an historic San Francisco brand, famous for eighty-four years. The plans to reopen the old John Wieland Brewery had been abandoned after a failed stock offering, which presented PB&M with the opportunity to purchase the iconic brand.

Wieland's Extra Pale was introduced to the public in September of 1936. While available in bottles and on draft, the brand became their first, and only, canned beer. It was introduced in a cone top style can. In addition to their Extra Pale Lager they produced a Bock Beer, and later added a Cream Ale, which replaced their Boilermaker Ale.

By Oct. of '41, sales of Wieland's Lager had out paced Frederickesburg Beer and the brand was dropped, along with the Old Joe's and Ritz brands. With the outbreak of WWII, war-time restrictions prohibited canning beer, except for the Armed Forces. It wouldn't be until 1947 that canned beer was back on the market, and when it was, Wieland's Extra Pale Lager appeared in a flat top can.

In 1947 the brewery's annual output was a high of 198,000 barrels. However, competition from larger San Francisco breweries and inroads by eastern brewers was taking its toll on PB&M. By 1951 they were down to 120,000 barrels.

In March of 1952, Pacific Brewing & Malting made a name change and officially became the Wieland's Brewing Co. Then two months later, on May 13th, the company introduced their "100 Year Beer" - erroneously claiming that the brand was created in 1852. Actually, John Wieland established his Philadelphia Brewery in San Francisco, in 1855, not that anyone really cared. Perhaps the company recalled placing "1852" on the Old Joe's Steam Beer label.

Ultimately, the Wieland's Brewing Company was to be a short lived venture. In November of '52, after a mere eight months and a continued decline in sales, it was announced that the brewery had been purchased by the Griesedieck family of St. Louis, making it their western branch of the Falstaff Brewing Corp.

The same fate was to befall two other breweries in decline. In July of 1953 the Rainier Brewing Co. was purchased by the Theo. Hamm Brewing Co. of MN; and in January of 1954 the Acme Brewing Co. was taken over by Liebmann Breweries of NY.

Only the strong survive. 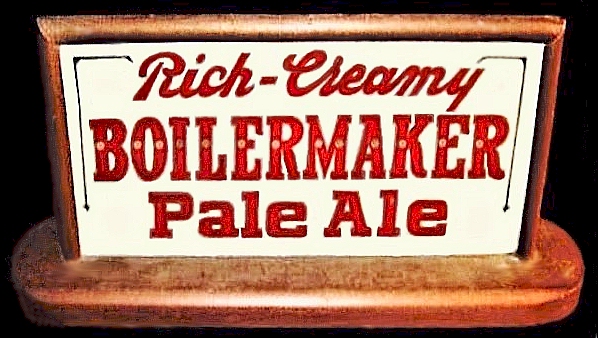 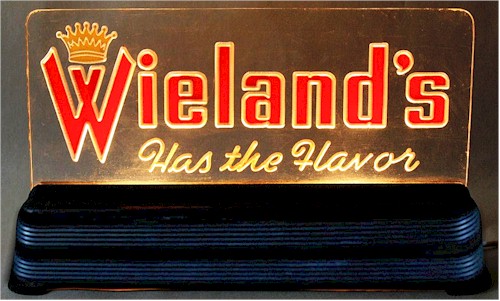 For any comments, additions, or corrections -
or for brewery collectibles you wish to sell - please contact me:

All contents including images are copyright by BreweryGems.com
and can not be used without permission from Brewery Gems.
Copyright © 2011 ~ All Rights Reserved.