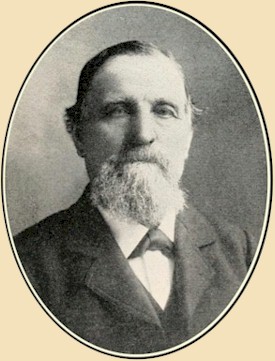 Jacob Adami was born in Hessen, Germany, on May 13, 1837. His father, Johanas Adami and the family emigrated from Germany in 1860. Settling in San Francisco, the senior Adami formed a partnership with Joseph Albrecht in 1863.

The newly formed brewing company was now operating as the Broadway Brewery instead of the San Francisco Brewery - which it had been since its establishment in 1854, by Jacob Specht.

From 1863 to 1868, the company's proprietors were listed as Albrecht & Co. (Johanas Adami).  In November of '68, Johanas was killed. The story passed down in the Adams family has it that he was stabbed and dumped in the bay, and the prime suspect was his business partner, or his son. However, Albrecht's eldest son was only 12 at the time of Johanas' death.

The brewery's proprietor was now Jos. Albrecht & Company. The "Company" no doubt refers to the estate of Johanas Adami. Another Adami, Henry, has been listed as a brewer since '64, and it's assumed he was Johanas' brother. Jacob Adami, Johanas' son, was also working at the brewery - as a teamster, driving the beer wagons. Now all the Adami family members have left, so there must have been some disagreement.

From 1869 to 1874, Jacob Adams (no longer Adami) was a teamster for the Mason Brewery, and in '73, his uncle Henry became a brewer for Kleinclaus, Fauss & Co's Willow Brewery.

In 1890, Jacob hired a brewer named Ferdinand Rechenmacher as a foreman, and the following year Ferdinand married his daughter, Emilie. After a short stint as partner in Deininger's Vallejo Brewery, Rechenmacher bought Weber's Auburn Brewery, in 1896.

The Broadway Brewery burned down in 1893, but was soon rebuilt at a new location - on the corner of Treat Ave. & 19th St. To help with cost of building the new brewery, Jacob took on a partner, Jacob Rohrer, who had been with the Chicago Brewery.

In 1894, Jacob Adam's son, William F., joined the family business as a bookkeeper. The following year the company is listed as the Broadway Brewery - Adams & Rohrer, proprietors. Jacob Rohrer's son, William J., also joins the company in '94, as a brewer.

The 1899 SF City Directory shows that another of Jacob Adam's sons has joined the firm, Gustave, who is listed as a brewer. This arrangement remained unchanged until 1903, when Jacob's youngest son, George C., joins the company as an engineer.

On Dec. 30, 1905, the company was incorporated as the Broadway Brewing Co. Fortunately the brewery escaped the devastation visited on many of San Francisco's breweries by the fire and earthquake of April 18, 1906.

Jacob died in 1909 and his son, George C. Adams, became president of the brewery. With the brewery's merger in 1916, another son, William F. Adams, became one of the directors of the newly formed California Brewing Association.

During Prohibition William was working at Acme's Fulton plant, (dba) the Cereal Products Refining Corporation, with JP Rettenmayer and Karl Schuster. In the '30s & '40s William held the position of Secretary for Acme Breweries, in both SF and LA. He and his brother Edward J. Adams were Acme major shareholders in the company.

Acme's Oakland distribution depot was also an Adams enterprise. It was established 40 years prior, by George C. Adams, as an agency for Jackson's Napa Soda, and was now being run by his sons, Edward H., and George T. Adams.

Copyright ? 2004 by BreweryGems  ~ All Rights Reserved.