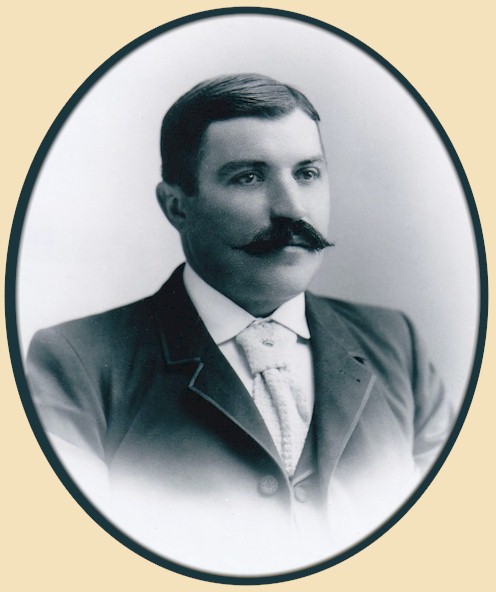 Biography of Reinhard Martin (1861 -1933)
and his
Imperial Beverage Co. of Spokane

This biography is a compilation early newspaper accounts, family stories, and a short profile from the History of Spokane County, by Rev. Jonathan Edwards, published in 1900.

Reinhard Martin was a native of Heimbach, Baden, Germany, born in December of 1861. He emigrated to America in 1883, arriving in New York City where he followed his trade of brewing that he had learned at an early age. On August 10th, 1884, he married Karoline Welle, also a native of Baden, Germany. Their first son, Charles John Martin, was born in Feb. of 1886 in New York.

In 1889, Reinhard and family headed west for Spokane where he accepted a position as foreman with Rudolph Grokow's New York Bewery. The following year his second son, William John Martin, was born there in Spokane. Reinhard stayed with Gorkow until 1893 when he accepted the position of foreman at the Galland-Burke Brewing & Malting Co. By 1895, Reinhard had become their brewmaster, but in December of that year he left the company and relocated to Missoula, Mont.

Reinhard Martin had partnered with a John Lang earlier that year and in October of 1895 they extracted a concession from Missoula's Board of Trade to provide the property and water rights to build a brewery there. The concession was granted and construction on a three story high, brick building began in December. 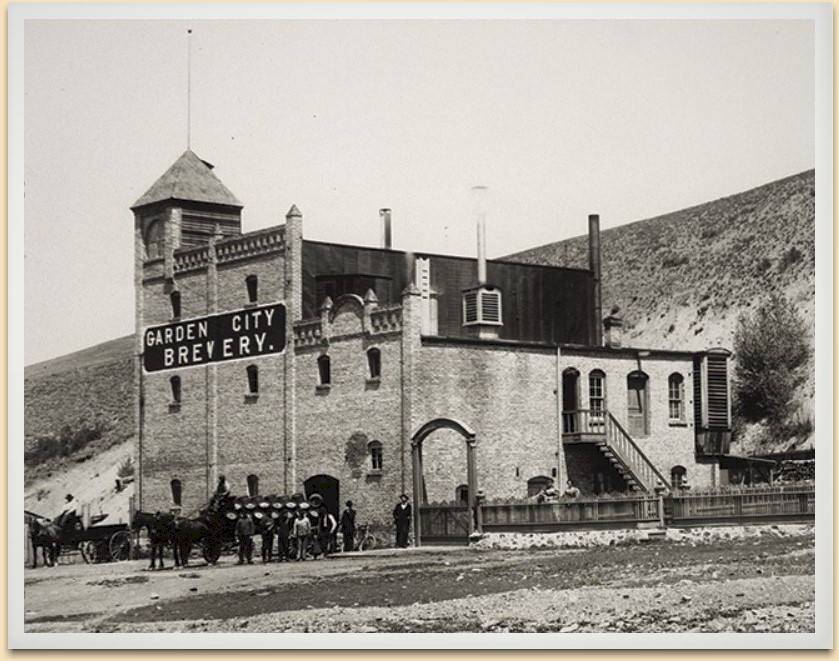 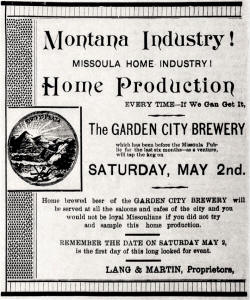 Two months later, in February of 1896, Reinhard's third son, Alfred "Fred" J. Martin, was born. And three months after that, beer was finally available from the new Garden City Brewery. In November of their second year (1887), Reinhard bought his partner's share in the company and continued as a sole proprietor. The following November an article appeared in a Butte, Mont. newspaper stating that Joseph Steiger, who had been a major shareholder in the Anaconda Brewing Company, was considering the erection of a brewery in that city. Instead, Steiger accepted an offer from Reinhard to purchase the Garden City Brewery, and on 14 November, 1898 the deal was completed and Reinhard returned to Spokane - with a larger family and more money than he left Spokane with.

Upon his return he wasted no time in reinvesting in a new enterprise. In February of 1899 the Spokane Chronical reported: "Theo Henco and wife sold to Reinhard Martin; lots 9 to 12, block 15, Cannon's addition (the Henco brewery), for $50,000."

Reinhard's immediate action upon gaining control of the Henco Brewery, was to expand its production capacity, and by the beginning of 1900 Henco's sales were surpassing those of both of his two local competitors, the New York and Galland-Burke breweries. However, in late March of 1900, just when Reinhard's expansion plans were showing success in terms of sales, Reinhard sold the Henco Brewery to Spokane Brewing and Malting, a syndicate seeking to consolidate the breweries of Spokane. The terms of the sale allowed Reinhard to operate independently of the syndicate, which he did successfully.

On March 3rd of 1901 the Spokesman-Review reported that articles of incorporation were filed by the American Brewing & Crystal Ice company of Washington and Oregon. The incorporters and trustees were Reinhard Martin, Ernest Siber, Charles Bodeau and John Hoss, all of Spokane, and Robert Scheffels of Wilbur. The company's principal place of business was to be Spokane.

In addition to his breweries, Reinhard had investments outside of the brewing industry. In the summer of 1908 he, along with other Spokane capitalists, purchased the Schoor Cooperage & Box Mfg. Co. of Bonners Ferry, Idaho. The sale was effective on December 1st, and they commenced doing business as the Cresent Woodenware & Box Mfg. Co., with Reinhard Martin as president. Reinhard was also a principal investor in a galena (lead) mine in Murry, Idaho, called the Jack Wente Mine. Two other large investors in this mine were part of his group that built the Baker City brewery.

All of Reinhard's ventures were sound and the outlook was positive. That was until the 1909 election, when the anti-saloon League was successful in getting the Local Option passed in Washington state. This allowed local municipalities to prohibit retail sales of alcoholic beverages. While not all communities chose to adopt this option, it was a portent of things to come. In both Washington and Oregon's November 1914 elections state-wide Prohibition was passed, effective on Jan. 1, 1916. Reinhard may have taken solace in the fact that, while he had to close his Spokane and Baker City breweries, he still had the Crescent Woodenware factory to fall back on. However, that source of income was removed by a fire that destroyed the factory on Jan. 5th, just four days after Prohibition took effect. Further bad news came five days later when, on January 9th, fire struck the American Brewing & Crystal Ice in Baker City. While the brewery could no longer brew beer, 400 barrels of beer remained in storage that could be bottled and shipped to California or other "wet" states. Unfortunatley the fire destroyed the bottling works and this liquid asset literally went down the drain.

Like many brewers, faced with either closing their plants or choosing to produce other products, Reinhard chose the later. On Jan. 11, 1916, the Spokane Daily Chronicle reported:

"Operating in affiliation with the Spokane Brewing and Malting company, the Imperial Beverage company was incorporated this week by local investors for the purpose of manufacturing and distributing imitation beer and other soft products of the brewery.
Reinhard Martin, superintendent of the Spokane Brewing and Malting company, is at the head of the Imperial Beverage company, according to the articles of incorporation announced today. Associated with him as trustees in the company are Adam Weiser¹, W. J. Martin², Robert Sheffels and Albert Held. The company has an authorized capitalization of $12,000."

While the Henco plant was shut down, he decided to give it a try with near-beer elsewhere and moved his new venture to a frame building on the syndicate's Galland-Burke property. He could then use that plant's bottling works to package his products.

Two years later, in February of 1918, a newspaper article stated that a permit had been approved to erect a $5000 building to be used by the Imperial Beverage company, at W906 Broadway, which is at Lincoln street and Broadway, and that the contractor had already wrecked two frame buildings on the property to make room for the new one-story building.

In addition to a low alcohol beer called Creme Beer, Reinhard also bottled soft drinks. Assisting him as shop manager was his youngest son, Fred, who in June of 1920, was married to Dorothy Owen. However, that happy event was soon to be overshadowed by tragedy. The following month, on July 20th, William J. Martin, Reinhard's middle son died, and three months later, on October 23rd his eldest son, Charles J. Martin, also died.

By the mid-twenties Imperial Beverage had become the Spokane bottlers for Coca Cola, Hire's Root Beer, Whistle, and Green River brands; but had outgrown its plant. On May 30, 1925, the Spokane Daily Chronicle printed the following:

"About June 15 the Imperial Beverage company, now located a W904 Broadway, will move to its new home in a new two-story and basement brick building at Desmet avenue and Pearl street, a few blocks west of Gonzaga university. The building, which is owned by St. Michael's scholasticate, will cost more than $40,000, according to Contractor J. J. Cox, in charge of construction. Work on the structure began February 15. The building is 142 feet on Pearl street by 100 feet wide on Desmet. The brick tower is 30x30 feet.
The Imperial Beverage company, of which Reinhard Martin is president, will install nearly $40,000 worth of equipment, to include brew vats, boilers, bottling works, and chemistry laboratory. Fred J. Martin is vice president of the company."

The new equipment included a state-of-the-art bottling line that was described by the Spokane Chronicle as:  "a pair of $25,000 automatic bottle washer, filler, crowner, and labeler. These machines, connected in series and working together to automatically wash, fill, cap, and label a bottle a second, and can go much faster.
One of the machines can handle two bottles a second.” The company's excellent bottling works enabled them to secure a contract for exclusive rights in Spokane to bottle Orange Crush.

The up to date brewing equipment also allowed Reinhard to employ a new method for producing near-beer. Normally a brewer would just stop the fermentation to limit the alcohol content, but this just made a cereal beverage. The improved method was to make a beer with the correct alcohol level, then remove the alcohol while retaining the flavor profile. Reinhard called his version, new style "Pilsener Brew". 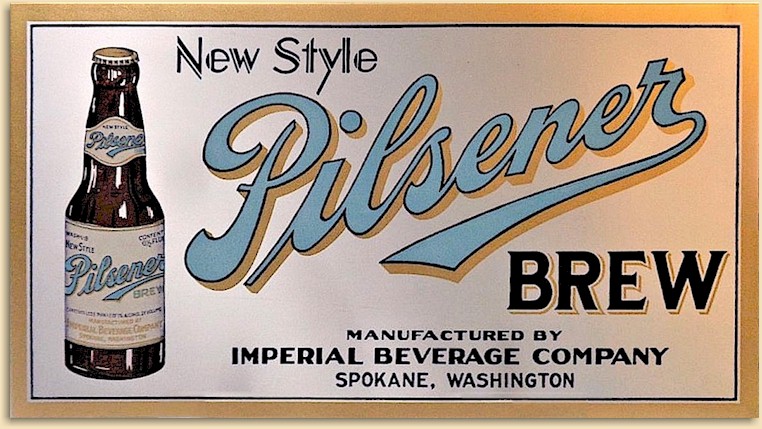 While Reinhard's bottling works were adequately overseen by his son, Fred, and manager, Roy Donnelly, the economic realities of the stock market crash of ’29 crash and crippling Depression that followed took its toll. By November of 1932, Imperial Beverage Company was in receivership. W. R. Orndorff was appointed by the creditors to liquidate the assets of the company, though the company did continue to produce their contracted soft drink lines under the direction of manager, Donnelly.

Reinhard Martin died on June 12, 1933 at the age of 72. While he lived to see the end of Prohibition, a destructive law that robbed him of his life's work, he never knew that Fred would carry on the family tradition of owning his own brewery - the Yakima Valley Brewing Co.

¹ Adam Weiser had been the New York Brewing Company's sole bottler for part of the 1890s.


For any comments, additions, or corrections please contact me:

Copyright © 2022 by BreweryGems ~ All Rights Reserved.