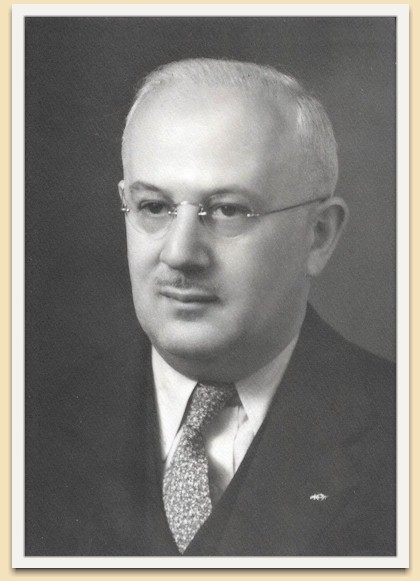 Ernest Morris Rosauer was born in June of 1884, son of Adolf and Emilie Rosauer, in Moravia, Austria-Hungary, now the Czech Republic. His family background was obtained from a history Ernest wrote for his grand-daughter, Renet Marie Rosauer. In it, he stated that his great-grandfather, Leo, "...was Financial Secretary and Manager of the Cardinal Archbishop Prince Schwarzenberg's estates. In 1845 Leo bought from him one of his estates, the Castle of Dobravitz." This is where Ernest and his siblings were born. His grandfather was named Moriz Rosauer and I surmise that Ernest's middle name was chosen to honor him. Ernest's given names at birth would have been Ernst Moriz, and later anglicized to Ernest Morris. He went by Ernest until about 1915 when he dropped it in favor of Morris.

His family history went on to say that "...in his younger years he lived in London, England, for some time, then in Havana, Cuba¹, and in Old Mexico." In later interviews with newspaper reporters, he spoke more of his early training, which included the study of malting in his family's business; bio-chemistry in Vienna; brewing in Pilsen, Bohemia, and in Ronneburg, Saxony-Altenburg; and English brewing methods in London. He also clarified that his positions in "Old Mexico" were in Monterey², and Mexico City³.

Immigrating to the U.S. in 1903, Ernest made his way to Los Angeles were he secured a position with the Maier & Zoblein Brewery. He soon made the acquaintance of Elizabeth Pauline "Lizzie" Piltz, daughter of Gustav and Henrietta Draheim Piltz (both of Germany), and in 1905 the two were married. In October of 1905, he and a fellow brewer at Maier & Zoblein, by the name of Jacob Rettenmayer, traveled to Chicago to enter a six month course in Fermentalogy at the Wahl-Heinus Institute.

After graduating from Wahl-Henius, Ernest returned to Los Angeles in early '06. Then in early '07 he took a position as brewmaster at the Angeles Brewing & Malting Company in Washington State. The young couple traveled to Port Angeles, Wash. and spent four years in this remote Olympic Peninsula community of about 2300 people. On July 13, 1911, their daughter, Bernice Emily Rosauer, was born, and just three months later, in October, Ernest accepted a position with the Sunset Brewing Co. in Wallace, Idaho.

Wallace is located in the Silver Valley mining district of the Idaho Panhandle, and was a rough-and-tumble mining town notorious for its numerous saloons and brothels. In 1910, Wallace was only half again larger than Port Angles, but in April of that year it was struck by a huge forest fire that destroyed one-third of the town - including the Sunset Brewery. However, the town and the brewery was soon rebuilt, and on Sep. 25, 1911, beer was again flowing from the brewery.

At a cost of $50,000 to reopen the brewery, the owners might have saved their money if they had foreseen what was soon to transpire. In February of 1915, the Idaho Legislature passed a statutory prohibition law making the State dry on January 1, 1916.

Rather than return to California, where brewing was still legal, Ernest (now Morris) chose to remain in Wallace, and in Jan. of 1916 he opened a Mining & Investment Brokerage office. However, Lizzie chose to return to Los Angeles with their daughter, and the couple were eventually divorced.  The brokerage business was a success and by 1917 the Rosauer Brokerage Co. had moved to Spokane.

Since he had experience with insurance in his brokerage business, Morris took another career change in 1919 when he signed on with the Spokane branch of the Equatable Life Assurance Society (ELAS). When the company opened a Lewiston, Idaho branch office in 1920, Morris took over as district manager there. While in Spokane, Morris had met his soon to be second wife, and in January of 1922, Morris married Marie Blanche Callison, daughter of George and Eva Black Callison. The following December Morris was re-assigned to head the ELAS's Yakima district, where the couple resided until 1929. During this period a son, Robert Morris, was born in 1924, as well as a daughter, Virginia Joyce, in 1926.

Prohibition was repealed in April of 1933, and Morris remained with ELAS in Spokane until May of 1933, when he signed on as Spokane Brewing & Malting's general manager and superintendent. However, he didn't stay for long. When Prohibition hit, most breweries shut down, but a few struggled to stay in business by making soft drinks and/or near-beer. Those who remained operational were in a position to rapidly resume brewing real beer when Prohibition was repealed, but there were not enough of them to meet the huge demand. Consequently investing in the brewing business was a sure thing, and that's exactly what Morris did.

He joined a group of local investors in establishing a corporation with express purpose of purchasing the old Shade Brewery property, and on 10 December, 1933, it was announced that Mutual Realty had purchased the property and changed the name of its corporation to Golden Age Breweries, Inc.  Morris was named vice-president and general manager of the brewery.

However, Morris did right by Spokane Brewing & Malting, in that he oversaw the installation of new equipment which sped-up brewing so that by July 1st Gilt Edge Beer could be again placed on the market. He also oversaw a $112,000 plant upgrade in capacity and output before leaving the company.

The old Shade Brewery had been shuttered in 1916 and its equipment shipped to Canada, so Morris had to direct a complete installation of a new plant, and it was to be completely state-of-the-art equipment. In April of 1934, he announced that the Brewery will be ready to market more than 10,000 barrels of three-month aged Golden Age beer by June 10th.

Subsequent sales were so overwhelming that just a year later expenditures were allocated to double the plant's output. Additionally, Morris was also quick to adopt new marketing, and on November 1st of 1937, Golden Age was the first brewery in Washington State to offer canned beer in a quart size.

Drawing on his early training on English style ales while in in London, Morris introduced Golden Age Ale. The brand was short lived, and  strangely he didn't produce another top-fermenting ale for the rest of his career.

Sales continued to increase and further upgrades were made to the plant, placing the company on a firm footing. So when Morris resigned on April 9th, 1941, it was totally unexpected. He retained his interest in the company, but offered no explanation for his sudden resignation, and stated that he had no future plans other than a vacation. However, 17 days prior, on the 23rd of March, the board of directors had chosen a new president for the brewery. The short time between the two events strongly suggest that the board's action caused Morris to leave the company.

A Defense Dept. registration form revealed that in April of 1942 he was in Portland, Oregon, employed by Columbia Breweries, Inc. of Tacoma. It's not clear just how long he had been with Columbia nor what he was doing for them. However, Columbia owned controlling interest in the East Idaho Brewing Co., and by mid-year Morris was in Pocatello, as vice-president and general manager of the brewery. It appears that he was initially hired by Columbia to be the brewmaster and superintendent of EIB, but instead Morris and his group of investors purchased their total shares outright.

Alt Heidelberg was Columbia's flagship brand and it was also being brewed at their EIB branch. As part of the sale, Morris gained the right to continue producing the popular brand under a royalty agreement, as it was produced for two more years.

In 1944, Morris and his group bought the remaining shares in the company from L.W. Perrish, then president of EIB. The brewmaster at their time of the change in ownership was William H. Biner, and at Morris' urging he agreed to stay on. The two brewers then formulated a new product. Aero Club Beer was on the market by November 1st of '44, and replaced Alt Heidelberg as the brewery's premium brand.

On 11 January, 1946, Morris established the Aero Beer Distributing Company, to better control market placement of his beer, and enhance his financial position.

Sales were increasing and the market had expanded into all of Idaho, as well as Utah and Wyoming. In Dec. of '48 the new blue bottle label was introduced, and six months later Aero Beer became available in a crown-top (aka cone-top) beer can. Given the strong sales the company was planning to enter the Nevada market.

By 1949, Morris was president, general manager, and as the majority stock holder - Chairman of the Board. The brewery's outlook was positive, so it came as a surprise when, in June of '52, Morris tendered his resignation - just as he had done eleven years prior. There may not be a connection, but in one of his last speeches he said that beer was a food beverage and is used in Europe for that purpose. He deplored the tendency toward intoxication in this country, but blamed it largely on Prohibition.

While Morris retired from the brewing industry he couldn't seem to quit working, and four months after leaving the brewery he returned to his old employer, the Equitable Life Assurance Society. He stayed with their Pocatello branch for two years, and then transferred to their San Jose, Calif. branch where he remained until his death on 14 August, 1962.


For any comments, additions, or corrections please contact me:

Copyright © 2022 by BreweryGems ~ All Rights Reserved.