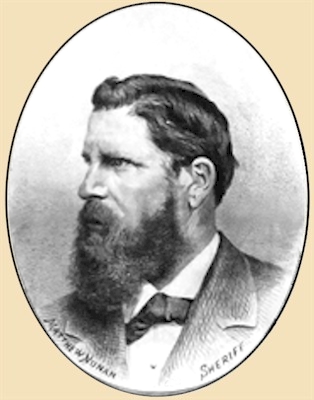 The following was taken primarily from a piece by Dr. Thomas Jacobs that was published in the November-December, 1987, issue of the American Breweriana Journal.

Additional facts were found in a statement by Matthew Nunan which was transcribed for H. H. Bancroft in 1885. Excerpts were then appeared in the History of California, Vol. VII, 1860-1890, by Hubert Howe Bancroft, published in San Francisco by The History Company, 1890.

"In 1905 Matthew Nunan, the 77 year old proprietor of the Hibernia Brewery, was the oldest active brewer in San Francisco and the only San Francisco brewer that individually owned and operated a brewery. Nunan had invested heavily in San Francisco real estate and had large holdings in Goldfield and Tonapah, Nevada, as well as an interest in the 'Genevieve' gold mine in Tuolumne County in the California gold country. His wealth was not sudden, but was the result of a long life of hard work and shrewd business dealings.

Matthew Nunan was a self made man in the classic sense. He was born in County Limerick, Ireland about 1828, but fled the Potato Famine of the late 1840's when me sailed for New York. Here he found employment, at the wage of $10 per month, on a farm in Hounsfield, near the shores of Lake Ontario, and it was here that he became a naturalized citizen of the United States in 1854.

After about four years in New York, his ambitions aroused by the lure of gold, Matthew Nunan traveled to California where he engaged in mining in Nevada County. Later, he moved to Michigan Bluffs, in Placer County where, with a group of fellow prospectors, he bought and successfully worked a number of claims known as the 'No Nothing Gold Mines'.

In early 1859, having grown tired of the mines, Nunan disposed of his interests, using the 'stake' he had accumulated to open a grocery and provisions house on the northwest corner of Powell and Washington streets in San Francisco. Perhaps it was the move from the mines to the more refined life in the city that convinced Delia Horan to take Matthew as her husband. They were married March 9, 1860 in New York City, the bride's home. Following his marriage Nunan continued in the grocery business, which in 1861 was relocated to the southwest corner of Bryant and Rich Street.

In 1866 he disposed of the business and purchased an interest in the Mission Street Brewery. In 1867 the brewery was moved from its location at 608/610 Mission Street, to 1225/1267 Howard Street, near Ninth. In 1870, after the death of his partner, Chas. M. Armstrong, Matthew's brother, Thomas purchased Armstrong's interest in the brewery, but did not become a partner, allowing Matthew sole proprietorship of the brewery.

The people of San Francisco nominated Matthew Nunan for the office of sheriff in 1875, and he was elected by 1,315 votes over Republican candidate, W. McKibbin. The Daily Alta California, in January 1876, reported his receipt of a gold shield enameled in American colors, surmounted by an eagle and surrounded by a wreath. The words 'Sherriff M. Nunan' were engraved in an enameled scroll surrounded by stars. He was also presented with a silver-mounted derringer (sic) and a gold amethyst ring."

While a Deringer would have been a nice gift it wouldn't have been much of a deterrent when policing the Barbary Coast, the city's infamous tenderloin district. For a serious sidearm, the Webley No. 2, English Bull Dog, .44 cal. revolver would have been more appropriate. The revolver shown here, with ivory handles engraved: "Sheriff Nunan," is believed to be what the reporter wrongly identified as a Deringer. 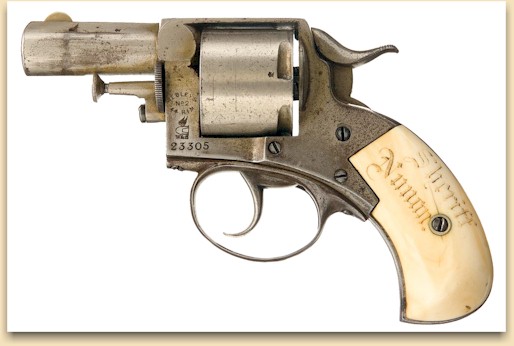 "His election as sheriff was not Matthew Nunan's first experience with public service. He had served previously as a member of San Francisco's first volunteer fire department, Broderick No. 1, and as a first-lieutenant in the first State Militia, the Jackson's Dragoons. During his tenure as sheriff, Nunan maintained offices on the first floor of city hall while still overseeing the operation of the brewery, which was located two and a half blocks away. He was elected again in 1877 to a second two ­year term, earning a salary of $8,000 per annum.

In July of 1902, in cooperation with other financiers, Nunan organized and established the City and County Bank, in which he held a directorship and served on the Finance Committee. By this time he was nearing his twentieth year as a member of the Brewer's Association, which he served in similar capacities. In addition to his membership in the Brewer's Association, Nunan also held membership in the San Francisco Chamber of Commerce, Merchant's Association, The Knights of St. Patrick and the Knights of Honor. He had many friends among San Francisco's social circle, including Governor Leland Stanford and Collis P. Huntington, whose friendship extended back to the old mining days.

The area south of Market Street, where the Hibernia Brewery was located, was devastated by the April 1906 earthquake and fire. However, Nunan’s establishment was back in operation at the same location by the end of the year where his son, Frank P. Nunan, aided his father in the operation of the brewery.

On January 15, 1916 Matthew Nunan died at his home on Oak Street in San Francisco. His age was reported as 87, which may or may not be accurate. It appears from the variety of conflicting ages that Nunan himself gave when registering to vote, that even he did not know his exact age.

Matthew and his wife Delia (Bridget) had six children, all but one lived into there 70s or longer. Their first was son Frank, followed by four daughters;  Ella, Marguerite, Adelaide, and Annastasia. There youngest was Matthew, jr., who lived only two months."


Matthew Nunan died in 1916. Excerpts of his obituary follows:

"On the 7th of January Matthew Nunan, who was prominently identified with the brewing industry of California for over sixty years, passed away at his residence, 452 Oak Street, San Francisco. He was 87 years of age.

Mr. Nunan came to California from New York over sixty years ago....He was active in the commercial affairs of San Francisco, being a member of the Merchant's Association and the Chamber of Commerce. At the time of his passing away he was chairman of the finance committee of the Brewers' Association.

Matthew left an estate of approximately $100,000 (equal to about $2.2 million today). Under the terms of the will his widow was to receive half of the estate and the balance to be divided equally among the five children, Frank Nunan, Adelaide Dooley, Margaret Bettencourt¹, Ella Spellacy and Anna Hourihan.


Footnotes
¹ Margaret was first married to John Thomas Hope, who died in 1891 at the age of 26; her second marriage was to John J. Harrigan; her third was to Manuel Bettincourt.