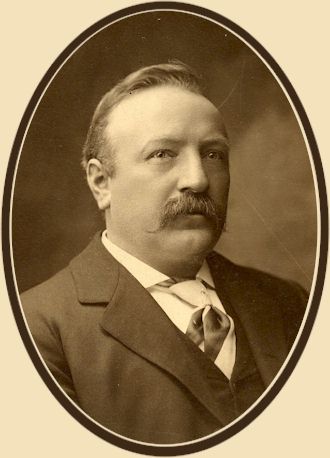 The following was taken from History of Seattle from the Earliest Settlement to the Present Time, by Clarence Bagley, The S. J. Clarke Publishing Co., Chicago, Ill., 1916.

"John Mueller, deceased, was the vice president of the Seattle Brewing & Malting Company and was long identified with that line of business in the city in which he made his home. He w'as born in the Rheinpfalz, Germany, on the 4th of November, 1861, and his death occurred in Seattle¹ on the 23d of September, 1914, when he was in the fifty-third year of his age. His parents were Adam and Elise (Blaesi) Mueller, in whose family were eight children, all of whom came to America.

From the age of twelve years John Mueller depended upon his own resources. He left home and was apprenticed to learn the brewer's trade, serving for a two years' term. He came alone to America when a lad of but seventeen years, hoping to find better business opportunities than he believed could be secured in his native country. After reaching the Atlantic coast he made his way across the country to Chicago, where he joined two brothers who were already located there. He first went to work at his trade in Blue Island, Illinois, where he continued for two years, after which he removed to Ottawa, that state, becoming foreman of a brewery there. In 1880 he returned to New York to enter the Brewers Academy, where he pursued a year's course of general study in connection with the study of the technique of the brewer's trade. Later he acted as foreman in the Ernst Brothers brewery of Chicago for four years and for three years was foreman in the brewing house of Lutz & Sons, of Pittsburgh, Pennsylvania.

The spell of the west was upon him, however, and in 1891 he arrived at Seattle, where he entered the employ of the Clausson (sic) & Sweeney Brewing Company as foreman. Not long afterward he purchased an interest in the business, which in 1893 was consolidated with two other enterprises of similar character, thus forming the Seattle Brewing & Malting Company, of which Mr. Mueller was chosen superintendent and for some time was the vice president, acting in both capacities at the time of his death. He thoroughly understood every phase of the brewing business and thus contributed in large measure to its success. He was also financially connected with the firm of Mueller Brothers, of Chicago.

It was during his residence in Chicago, in 1889, that Mr. Mueller was united in marriage to Miss Bertha Diesing, a native of that city, and they became parents of three children, Minnie, Chester and Marguerite. Mr. Mueller was a member of the Fraternal Order of Eagles, of the Seattle Turnverein and of the German Club. From the time of his arrival in Seattle he was deeply interested in the upbuilding and welfare of the city and of the suburban town of Georgetown, where he maintained his residence. He served there as a member of the school board and did much to further the interests of public education. He was also chief of the old volunteer fire department of Georgetown, was a member of the city council and for six years was mayor of the city, exercising his official prerogatives in support of various plans and measures which have contributed to municipal progress and all matters of civic virtue and civic pride. One who knew him well, himself a prominent business man, said : "During the years I have known him, John Mueller has always appealed to me as a fine type of manhood, one of the finest of those who came to Seattle when the city was young and grew up with it." He was highly esteemed by the people of Georgetown and deep and sincere were the expressions of sorrow heard on all sides when the news of his sudden death was received."

John Mueller served as Mayor, School Board member, Superintendent of Seattle Brewing & Malting's Georgetown brewery, and the town's Fire Chief - which was totally comprised of brewery personnel. Georgetown was throughly a brewery town.

John Mueller died in his apartments at San Francisco's Palace Hotel while on a business trip for the brewery. His wife, Bertha, was at his side when he died. He left an estate valued at $400,000 to his wife and three children.

Copyright © by BreweryGems  ~ All Rights Reserved.