On the 23rd of December 1930, George and his father formed their Horluck Investment Company with a starting capital of $99,000. Meanwhile, George's malt shops were doing well and the Investment company backed a new venture. They would produce the ice cream for the chain of shops in their own creamery.

In early 1933, with the end of Prohibition eminent, Horluck's, Inc. announced plans to enter the brewing business. In their March 19th issue the Seattle Daily Times reported:

For the manufacture of an exclusive type of beer, comparing with the famous Carlsberg brew of Copenhagen, George Horluck, head of Horluck's, Inc., yesterday announced plans for the construction of a new brewery, costing $50,000, which will start manufacture about April 10 and begin marketing its seasoned product by June 10.
Mr. Horluck said: "My new enterprise will be know as the Germania Brewery, and it will be financed entirely with my own money, to make beer exclusively for hotel dining rooms and high-class restaurants."

The brewery opened on schedule, on May 13th, as Horluck Malt & Brew instead of the Germania Brewery. They were located at the corner of Westlake and Mercer, at 606 Westlake St. N. They soon chose to do business as the Horluck Brewing Co.

The only brewery in Seattle producing beer immediately after Repeal was the Hemrich Brewing Co. followed directly by the under capitalized Pilsener Brewing Co.  Consequently, the demand for beer far exceeded the supply.

A Danish brewmaster, Nils Christiansen, was engaged to consult with their first brew - a Danish style draught beer. While waiting for their first batch to age enough for release, George Horluck ordered a shipment of beer from his cousin in Denmark - who was head of the Tuborg Brewery. On May 13th, 1,600 cases and 300 barrels of

The Tuborg Beer served to encourage the public to then try "Horluck's Danish style Draught" (see ad - right), and the company quickly made plans to expand their capacity. By November '33, a new brewhouse was completed, increasing the plant's output to 300 barrels per day.

Their Danish style draught beer sold well, and their head brewmaster introduced some additional brands, both bottled and draft. But by the beginning of '34 the major competition had come on-line. In late January, the Century Brewery Assn. introduced their Rheinlander Beer accompanied by a massive advertising budget. Century's ultimate dominance would result in the acquisition of the only two breweries left in Seattle, Hemrich's and Horluck's.

On 8 June of '34, the business was incorporated as the Horluck Brewing Company. The firms vice president and general manager was Bernard Hochstadter, a native of Munich, Germany, who brought 40 years of brewing experience to the firm. Prior to Prohibition, Hochstadter was president of the Everett Brewing Co.

The brewery produced a number of brands (shown below) including: White and Gold (a pre-prohibition brand from the Claussen Brewing Assn.), a Belfast type - Imperial Ale, and Horluck's Vienna style Draught. Another draft label shown is the earlier, Horluck Draught.

Draught, or draft, was meant for tavern consumption. It was fresh and un-pasteurized, and was recognized as beer at its best. The same was true prior to Prohibition and besides enjoying the beer in the saloon it was common to take beer home in a covered pail called a growler. During the early days after Repeal, where it was legal for "off-sales", you could have the bar-keep fill a jug for carry-out. This was a popular option, and many breweries bottled un-pasteurized draught beer in half-gallon size bottles.

In the Sept. of '34, Horluck's competitor, the Century Brewery announced a novel packaging scheme for their draught beer. They began offering a 3-pack of 22 oz. bottles calling it a half-gallon package. This was the first time such a merchandising plan had ever been tried, and was an immediate success. Other NW breweries soon adopted the packaging, including Horluck. Below (right) is the 22 oz., no-frills label that Horluck chose, and they labeled their 3-pack box a Growler. 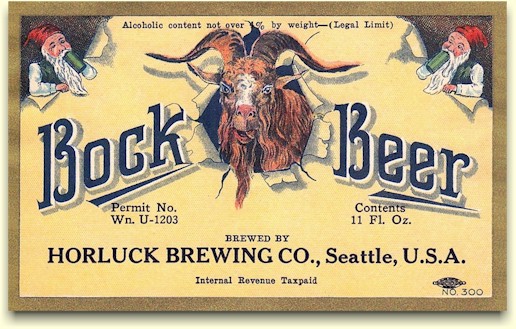 One of the early brews produced each Spring was their Bock Beer, a paler style bock than made by the other brewers. In the April '34 edition of the trade publication Brewer & Dispenser, they discussed Horluck's first Bock release:

"Horluck Brewing Company with plant in Seattle, dramatized the introduction of their bock beer to the Seattle Public by enthroning a real buck goat on a Horluck truck. Mr. Goat was accompanied by several men costumed as German country swains and the whole layout assisted greatly in the promotion of bock sales for Seattle retail dealers in Horluck's beer."

The company also produced a Half and Half - only available in bottles - which was described as "a blend of Highland Roasted Malt, and Old Dark Ale Brews - Aged long in Wood." They also bottled their Horluck's Seattle Beer in the new 22oz. bottles (below). 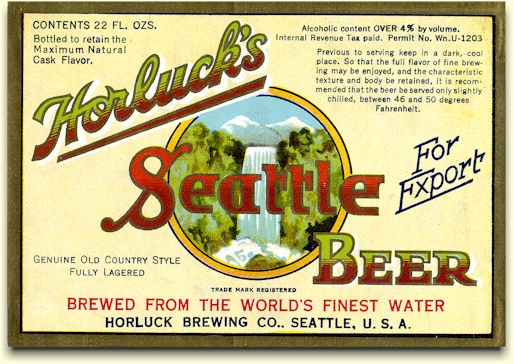 But their most popular product was introduced in May of 1935. Bohemian Brewmaster, Adolph Verhill was brought over from Europe in late '34 to formulate and produce a new brew, and after four months of cellaring it was ready for the market. Horluck's Vienna Style Beer was a naturally carbonated or "krauzenized" brew, and was of a light Pilsner style. 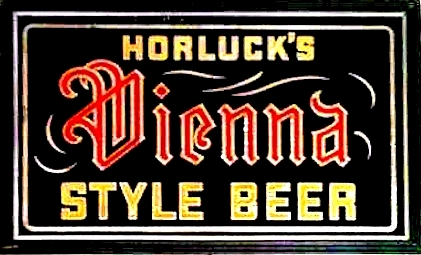 By 1936 Verhill had replaced Wm. Schick (who moved to the Columbia Breweries in Tacoma) as head brewmaster, but Verhill's reign was short lived. With Rainier Beer now being made in Seattle, Horluck was looking for something special to differentiate their popular brand from the heavy competition. He replaced Verhill with Munich born, Franz Puels, a brewmaster who took the position after running breweries in Brazil and Hong Kong.

Puels had a huge, 212 gallon, seamless copper brew kettle installed that used the old-world method of boiling the wort by direct-fire rather than super-heated steam. The new Vienna Beer was introduced in May of '38, and their ad campaigns touted their beers as being "Fire Brewed at 2000 Degrees." The supposed benefit was that the grains were fully cooked! 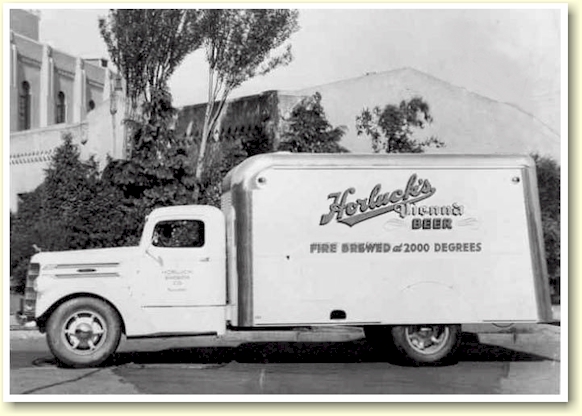 We'll never know if Puels' Fire Brewed Vienna Beer would have threatened Rainier Beer, since both Puels and the Horluck would only have twelve more months to perform. In May of 1939 the Horluck Brewery was absorbed into Emil Sicks' brewing empire, and Franz Puels returned to Germany.

The Horluck Brewery didn't produce many point-of-sale items, at least not that have survived. The R.O.G. sign (above), this Prismatic sign, the three glasses, and ball tap knob (below) are all for their flagship brand, Horluck's Vienna style Beer, ca.1934-1939. However, anything with "Fire Brewed" on it is only from the May '38 to May '39 time frame, and would be harder to find. 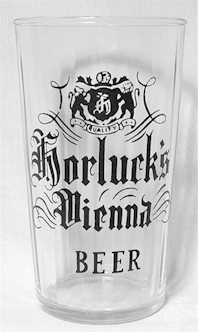 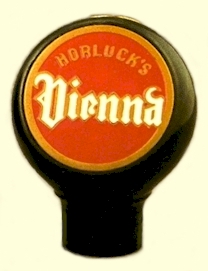 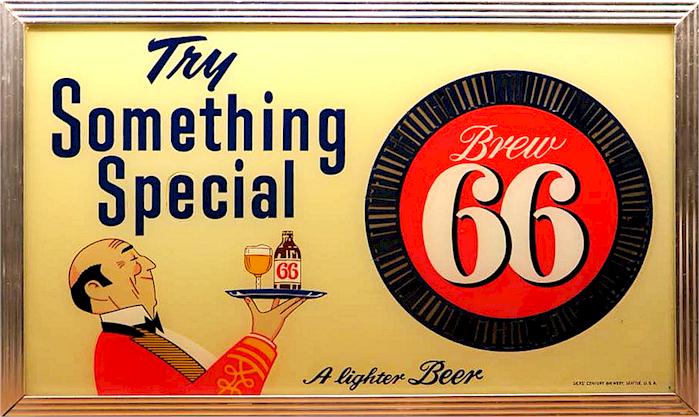 For any comments, additions, or corrections -
or if you have items for sale - please CONTACT ME

All contents including images are copyright by BreweryGems.com
and can not be used without permission from Brewery Gems.
Copyright © 2008 ~ All Rights Reserved.