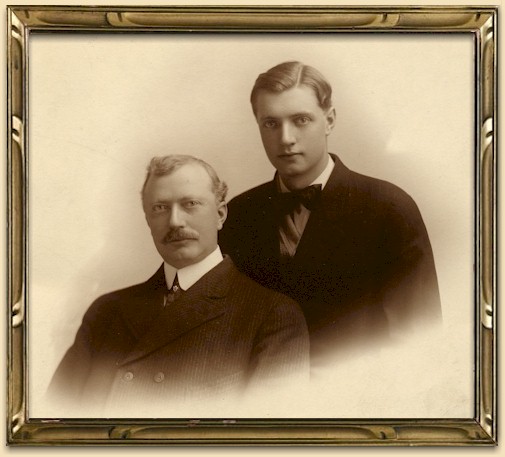 The following is the composite of a biography published in 1903, his 1935 obituary, private work done by a Hemrich descendant, and independent research.


Alvin M. Hemrich was born in the town of Alma, Buffalo county, Wisconsin, on the 14th of February, 1870, a son of John [see biography] and Catherine (Koeppel) Hemrich, both of whom were born in Germany.  The father was for many years engaged in the brewing business at Alma, Wisconsin, and he was seventy-three years old when he died in 1896.

Alvin passed his boyhood days in Wisconsin and secured his early educational discipline in the public schools. By the age of sixteen he had joined his brother William in the management of the business founded by his father in Alma. When he turned eighteen he traveled to the town of Durand, WI, to work in the brewery of Philip Lorenz.

On the 8th of May, 1890, Mr. Hemrich was married to Wilhelmina "Minnie" Rutschow, who was born in Germany, and the daughter of Charles and Wilhelmina (Benecke) Rutschow, both of whom were born in Prussia. His first son, Elmer, was born in Sept. 1890 (see  Elmer's biography). According to the Brewers Journal, in January of 1891 he bought out Lorenz. However, he apparently disposed of his interests within the year in order to join the rest of the family in Seattle.

After the family's arrival in Seattle, Alvin's older brother, Andrew, secured a position for Alvin as a brewer in the nearby Canadian province of British Columbia. The Victoria Brewery (est. 1858) was in Victoria, on the south tip Vancouver Island, (a mere 130 nautical miles from Seattle). On 7 January, 1892 the Brewery had been incorporated as the Victoria Brewing & Ice Co., LLC.  Andrew Hemrich was a provisional trustee in the new firm, and served as Vice-president. Andrew was also president of the Bay View Brewing Co. of Seattle.

For two years, Alvin held the position of manager of the Victoria Brewing & Ice Company, and it was here in September of 1892 that his 2nd son, Andrew, was born.

In 1893, Victoria Brewing and Ice merged with the Phoenix Brewery to form the Victoria-Phoenix Brewing Company, LLC. Alvin then returned to Seattle and for a year was foreman for the Albert Braun Brewing Association which had just become part of the Seattle Brewing & Malting Co. When the Braun plant was closed, he then took a similar position with the Company's Bay View plant. He continued until 1896, being finally compelled to resign by reason of failing health, and he then passed some time in travel, principally in California.

After recuperating his energies Mr. Hemrich returned to Seattle in late 1896, and took over the plant and business of the North Pacific Brewery (also known as the old Slorah brewery). The firm was operated as the Alvin Hemrich Brewing Co. In early '98, Alvin entered into business with his brother Louis, and a Julius Damus, in the organization of the Hemrich Brothers Brewing Company. Alvin was president and manager of the company from the time of its organization, and the success of the enterprise was large measure due to his able and well directed efforts.  As a principal investor, he also held the position of president of both the Claussen Brewing Association and the Independent Brewing Company of Seattle. Additionally, he  made judicious investments in local real estate and owned a beautiful residence, which he erected in 1898. It was located at 503 Melrose Avenue N., and was one of the most attractive homes in turn-of-the-century Seattle.

In November, 1901, Mr. Hemrich purchased the Grays Harbor Brewing Company, which was under construction in Aberdeen. He then organized the Aberdeen Brewing Company, which was incorporated with a capital stock of sixty thousand dollars, and he began the operation of the plant shortly afterward. In May of 1905 Alvin and Minnie's 3rd son, Walter was born. Their eldest son, Elmer, after finishing his schooling in Seattle, joined his family in Aberdeen. Two years later, in 1911, Elmer assumed the position of plant manager - at the age of 21.

On January 1st, 1916, statewide Prohibition stopped the production of all alcoholic beverages - four years before national Prohibition. Most breweries were forced to close, but his Aberdeen Brewery stayed open by increasing its production of soda waters which they had been producing since 1907. The Aberdeen plant had also installed an ice plant, and with it consolidated the two other ice plants of the city, so that they now supply all the ice for Aberdeen and Grays Harbor.
Both his Aberdeen brewery and Seattle's Hemrich Bros. brewery were also producing a non-alcoholic "near-beer."

In February of 1915 he had established the Surf Packing Co., an Aberdeen cannery equipped for canning razor-backed clams. Then in 1919 the family expanded their razor-clam packing business when Elmer built a second cannery at Snug Harbor, on the east side of the Alaska's Cook Inlet. This cannery, in addition to packing clams also prepared salmon. However, it was lost by the Hemrich family during the panic of 1922.

Undeterred by these reverses, Alvin cast about for a new operating site. In 1923, after selling his brewery, in Seattle, he was able finance the construction of a new cannery at Kukak Bay in Southwest Alaska. This became one of the most successful fish preserving establishments in the North. Like many other organizations of its type, the Surf Canneries, Inc. enjoyed notable success from the time of its founding until the beginning of the great economic depression of 1929.

When national Prohibition took effect in 1920, Alvin sold his Aberdeen Ice & Cold Storage business and concentrated on the soda works and near-beer production at both of his breweries. The Aberdeen Brewery named their product Golden Age, the same as their once popular brand of beer, and the Seattle brewery was producing a sparkling fruit drink called Applestaff, and a near-beer called Lifestaff. In spite of their best efforts, the Hemrich Bros. plant was sold in 1923, and the following year the Aberdeen plant met the same fate.

In 1929, Alvin returned to his true calling with the establishment of Hemrich's Inc. This was another brewing venture in Seattle, established in the old brewhouse adjacent to the Bay View Brewery - which was now the Bayview Milling Co. His son Elmer, after leasing the Alaska cannery to another packing company, could now concentrate on helping his father reopen the old plant, and resume the brewing of near-beer.

By early 1933, anticipating the demise of Prohibition, Alvin first updated the near-beer plant in the old brewhouse, and then built an additional facility farther south on Marginal Way (Plants #1 and #2 respectively). Upon Repeal, in April of '33, he commenced operation of the Hemrich Brewing Co. (Plant #1) and the Western Brewing Co. (Plant #2). However, in May of the following year he dissolved Hemrich's Inc., selling Plant #2 (including the rights to the Hemrich name), and enhanced Plant #1 in the establishment of the Apex Brewing Company.

The end of Prohibition found two of Alvin's sons immersed in the brewing business. Elmer seized the opportunity to purchase and remodel the old Columbia Brewery in Tacoma, and for two years served as president of the Columbia Breweries, Inc., followed by the establishment of the Elmer E. Hemrich Brewery.

Alvin's youngest, Walter, having recently completed training at the Chicago Brewer's Institute, assumed the position of superintendent of the new Apex Brewery. Unfortunately, in early February of 1935, Alvin slipped on icy pavement at his Melrose Ave. home and broke his ankle. On 25 February Alvin M. Hemrich died at Swedish Hospital from a blood clot due to complications caused by the ankle injury. He had celebrated his 65th birthday just eleven days earlier. 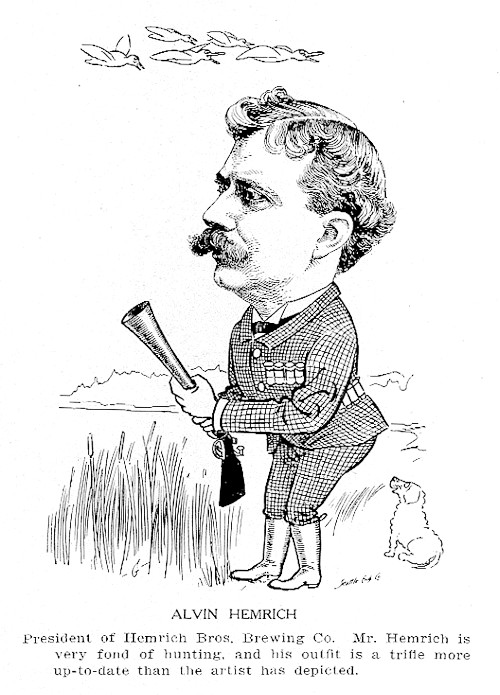 This image first appeared in a monthly magazine and was later included in "Men Behind the Seattle Spirit - The Argus Cartoons," published 15 July 1906 by H. A. Chadwick, editor Argus Monthly.

For any comments, additions, or corrections - or if you have items for sale - please contact me:

Copyright © 2006 by BreweryGems ~ All Rights Reserved.