If you find something that you would like, please CONTACT ME. I accept personal checks, money orders, or PayPal.

As a collector I am always hoping to upgrade or add new "brewery gems" to my collection. For my specific "heart's desire" - see my BREWERIANA WANTED page. Perhaps you have some brewery items you wish to part with. 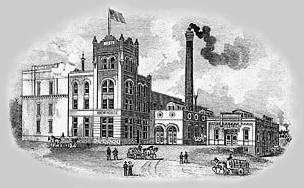 This site contains over 90 western BREWERY HISTORIES, beging with the Olympia Brewing Co. and its four branches: the Bellingham Bay Brewery, the Salem Brewery Association, the Acme Brewing Company, and the Port Townsend Brewing Company.

I've also included 25 profiles on notable Brewers and Bbrewmasters - including Emil Sick and Andrew Hemrich, both of Rainier fame; as well as Olympia's Leopold Schmidt.

An alphabetical listing can be found on the SITE MAP.